Why You Should Begin Prepping Today

Whats the buzz? Tell me whats a happenin…Preppers sometimes get a bad rap in the media, however this tide is turning since more and more people are introduced to prepping and the reasons behind it. Perhaps you have heard of prepping, but arent quite sure what it is, and if it is something you should consider. With our economic situation the way it is, and the increasing dangers of our modern world, it is prudent to find out about more ways to protect yourself and secure your future.

via Why You Should Begin Prepping Today.

How To Begin Prepping On Only 10 A Week

It Isnt Too Late To Begin, Nor Should It Be Too ExpensiveIn this terrible economy, it is difficult to do anything other than just keep your head above water. Because of this many people find it difficult to plan ahead and prepare for any size disaster. From something as small as losing your job to as great as an environmental disaster, have you considered how you would feed yourself, or provide other basic necessities of life?

via How To Begin Prepping On Only 10 A Week.

Prepping on a shoestring budget

Prepping on a shoestring budget.

Preparing for disasters such as economic collapse, civil unrest, natural or environmental disasters or chemical/biological threats can be challenging. Every day the chances of one or more of these disasters occurring seems to increase.The urgency to prepare seems to rise in proportion to the latest news stories.

There seems to be a campaign going on to completely demonize gun ownership in the media these days. I was very concerned that there may be something fishy about the Aurora shooting. That (rightly) caught our attention, and ever since, the issue of gun ownership has been thrust into our face by the media.

Just a couple of days ago, the media begins reminding us of the shooting that took place in Arizona. I was very curious about the motivation behind that. I was appalled that the Loughner case was even brought up in such prominence (hint look at the timestamps of the news stories). I thought it was a dirty trick although I should have expected it. 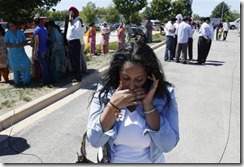 Now today we have another mass shooting! I can’t believe this. On top of that the victims were Sikhs, which I understand to be enemies of Muslims.

This shooting and its religious angles will surely be exploited for political gain. I can’t wrap my head around this at all. All I do know is there is a very, very strong push to take our guns. If Americans can’t see the writing on the wall, they should definitely take a closer look at the situation. Here is a good link on the true cost of banning guns. Our founding fathers specifically mentioned the right to keep and bear arms. This wasn’t added because “hunting and shooting are part of a national heritage”. They were added to keep us safe from tyranny.

There is indeed tyranny that we face today. Take the Anaheim  protests for example, notice the police are getting more and more militaristic than ever. This is the reason for the push for more gun elimination control.

RTNews has reported that the Syrian rebels (you know, the ones the U.S. has been supporting and providing arms to) have possibly committed a war crime by executing POWs.

Are these rebels any more legitimate than Assad and the humanitarian crimes he’s allegedly committed? How does the U.S. claim any sort of moral superiority?